From a sample report to a Dradis template

From Nessus to Word

Export from the command line

Export your project to CSV

From a sample report to a Dradis template

From Nessus to Word: a hands-on example

Screenshots need to be alone on their own line to export successfully. If the screenshot doesn't have blank lines before and after it, or if there is white space or other characters after the screenshot's final exclamation mark, your project will most likely export into a corrupted report. This validator warns you if any of your Screenshots have other characters on the same line, and if the lines before and after it are not blank. 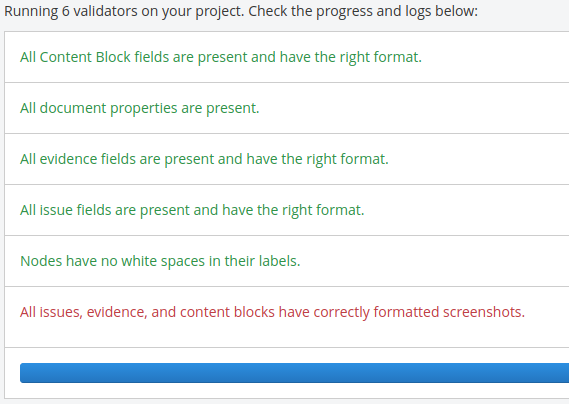 Scroll down to the log to see what Screenshot is causing the error.

In this example, an Issue contains a screenshot, but is incorrectly formatted (e.g. due to a trailing space or due to the screenshot link not being on its own line). On export, this would likely create a corrupted report. When this happens, the validator will display an error like:

To resolve this, just edit the Issue referenced in the warning ("SQL Injection" in this example) to ensure that the screenshot link is on its own line, with blank lines before and after it, and with no trailing characters after the screenshot.

The Screenshot validator can also find errors with screenshots in Content Blocks or Evidence, for example, and will find errors even if no report template properties are configured.

Great job, you reached the end of the guide! Have you read all of them?

Learn practical tips to reduce the overhead that drags down security assessment delivery with this 5-day course. These proven, innovative, and straightforward techniques will optimize all areas of your next engagement including: